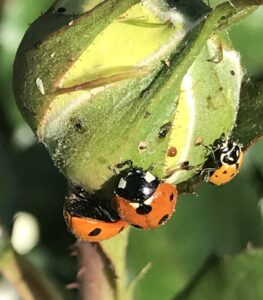 We found nearly two dozen ladybugs at the McKinley Park Rose Garden in Sacramento. The Garden features more than 1,200 rose bushes and covers  1 – 1/2 acres at one end of the park. Ladybugs were sitting and climbing on leaves in singles, pairs, and groups. 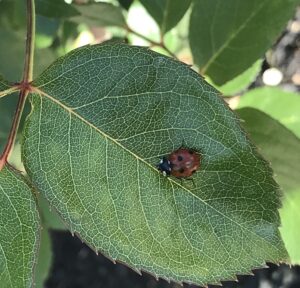 We found two species this year: Seven Spotted and Convergent using an identification guide from the Lost Ladybug Project. Link on Field Guide to download a copy.

One year ago, we searched four consecutive weeks beginning in Mid-March and finishing the Saturday after Easter, Ladybugs hid until our last hour of our fourth day.  We were at the McKinley Park Rose Garden. We chose to return to the garden this year for what we hoped would be “immediate success.”  We found ladybugs as soon as we arrived  .Last year’s cooler temperatures during Winter and all the way through March, kept ladybugs in hibernation until mid April. This year Nature Detectives found ladybugs as early as February in their schoolyards.

Nature Detectives raced from one end of the Rose Garden to the other searching for more Ladybugs. Each carrying a magnifying glass,, they searched inside of bushes and shouted to others, “Over here. I found some.”  They all came racing over to look. One Nature Detective parent brought the observation tube and stored ladybugs inside to make it easier to identify them.

Once completing their search, Nature Detectives drew what they found in their Discovery Journals. 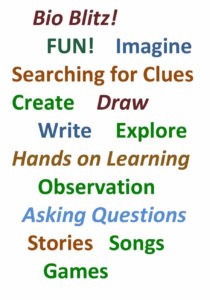